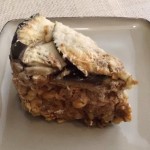 Re the ingredients, use more or less as you see fit.  Depends on what you like.  And this can easily be made vegan by changing a few ingredients.

Parmesan Cheese- grated, about a cup, or more

Eggplant- 2 medium, sliced thin, coat in olive oil and broil until cooked through

In a Dutch oven, sauté onions in olive oil until partially cooked and add “beef.”  Cook until “toasty.”

Mix 2 cans tomato with a beaten egg and approx 1 T cornstarch (both help bind meat/elbow mixture), mix into meat, and season with nutmeg, cinnamon, salt and pepper.  Season to your own taste, but season well enough to stand up to the addition of elbows.  Add elbows and 2/3 of Parmesan and mix thoroughly.  Check seasoning.

In a separate pot, mix approx. 1 T cornstarch into soymilk and start to warm slowly.  Add salt and pepper, continuing to bring up heat slowly.  Beat three eggs separately.  You must “temper” the eggs.  (Do not pour egg mixture into hot soy milk or you’ll have scrambled eggs.)  Temper the eggs by pouring small amounts of soy milk into the eggs to bring up temperature of the eggs.  When the eggs have been warmed, pour into soy milk and continue cooking and stirring while the ”Bechamel Sauce” thickens slightly.  Adjust salt/pepper.

Bake at 350 F for 45 minutes until the top is golden.  After removing from the oven, let Pastitsio cool for a while before cutting.  (Half-hour, hour.)  This is much better on the second day when the flavors have had a chance to meld, and it’s easier to cut.  And, you can see the meat/elbow, and Bechamel/eggplant layers even better.